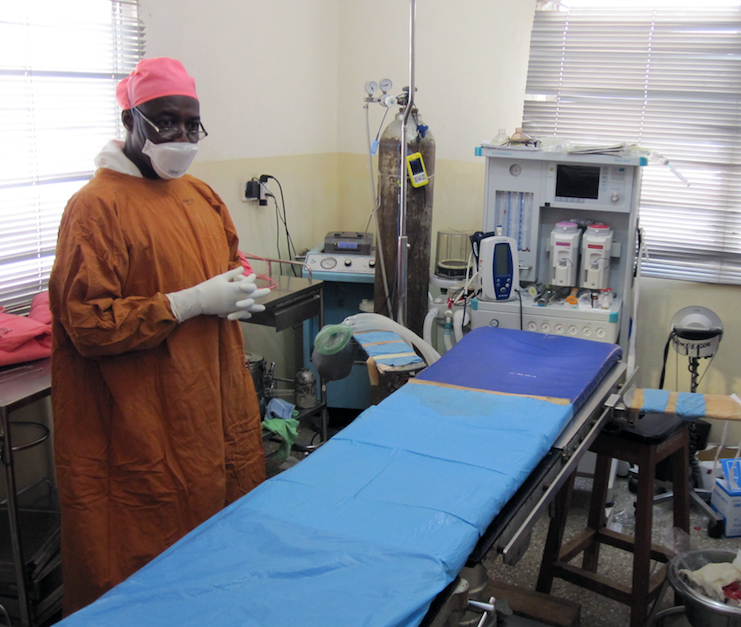 It’s a typical surgery day at Bongo District Hospital. Five males ranging in age from 5 to 51 years old are sitting in the dental ward which has served as the hospital’s operating theatre ever since the fire in 2012. All of the men are about to undergo inguinal hernia repair surgery. Dr. William Gudu completed 72 of these procedures last year, so this is nothing new. Dr. Gudu’s biggest concern as he prepares for surgery is whether or not to get the backup generator turned on. The hospital is experiencing one of its frequent blackouts and the cost of fuel consumed by the generator comes out of the hospital’s budget for disposables. If he uses the generator today, he is at risk of running out of IV fluid and examination gloves next week. He looks at the 5 and 9-year-old patients waiting for their operations and says “turn on the generator, I have no choice”.

Later, while completing his rounds, the doctor is faced with another tough issue. The male ward is full and he has to make space for a new case. One man in the ward could be discharged given his condition, but the doctor first asks where he comes from. Some of the patients have travelled all the way from neighbouring Burkina Faso to acquire medical service and Dr. Gudu prefers to keep patients under his watch until he is absolutely certain that they are healthy. If he sends them home too early, it could be months or years until they gather enough funds to come and see him again.

Near the end of his rounds, Dr. Gudu turns to me saying “We have a problem…”

During his long pause, I run through all of the possible things he could be referring to: the unstable electricity supply, the pregnant teenager in the maternity ward who is too scared to ask her partner about his HIV status, the meningitis outbreak, the chicken walking through the kids ward, or maybe the lack of available medicine and funding. Apparently I have forgotten that Dr. Gudu is not one to complain as he finishes his sentence…

“I have not heard any serious laughs today. I will have to tell more jokes.”

Stay posted for more on Dr. Gudu, and help him and other doctors in the northern regions of Ghana by donating to Ghana Medical Help today.